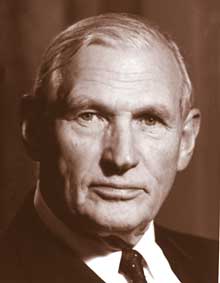 The Journalist Fund for Further Training was established by D. Tech Marcus Wallenberg (1899-1982), one of the great industrialists of Sweden. He was also a doctor of engineering, banker and diplomat and a member of a renowned family dynasty, The Wallenbergs.

Since The Journalist Fund was set up, the bank SEB  where Marcus Wallenberg held leading positions for decades  is managing the assets of the foundation.

The purpose of The Journalist Fund is to help professional journalists in Sweden to get further training in subject fields of importance in their work. According to its statutes the foundation may also award scholarships to journalists interested in academic studies in journalism. The last years more than 80 scholarships have been awarded each year.

The Journalist Fund is legally a private foundation which is best described as a legal entity without an owner, and as such it enjoys favourable tax treatment. The foundation is registered by the County Administrative Board which supervise the administration of the fund and handles registration of board members.

According to its statutes the board is appointed by four Swedish media bodies:
Swedish Media Publishers' Association, The Swedish Union of Journalists, The Swedish National Press Club and The Press Institute. These bodies elect chairperson and deputy chairperson.

By tradition the chairperson is a prominent jurist. The present chair is Johan Hirschfeldt, former president of the Svea Court of Appeal and former Chancellor of Justice.

In the same way the deputy chairperson is by tradition a prominent academic. Presently this position is held by professor Ulla Carlsson, the holder of a new Unesco Chair in Freedom of Expression, Media Development and Global Policy at the University of Gothenburg.